Moss can be a lovely sight in the right places, turning a forest walk into a stroll through fairyland. But if you find it in your landscaping, moss is likely to be less accepted.

While it can be a pretty addition to cool woodland glades, when moss crops up in your yard it forces the other plants to compete with it for water and nutrients. And because moss is such a dense, absorbent substance, your existing grass gets easily pushed out.

How To Kill Moss: Everything You Need To Know 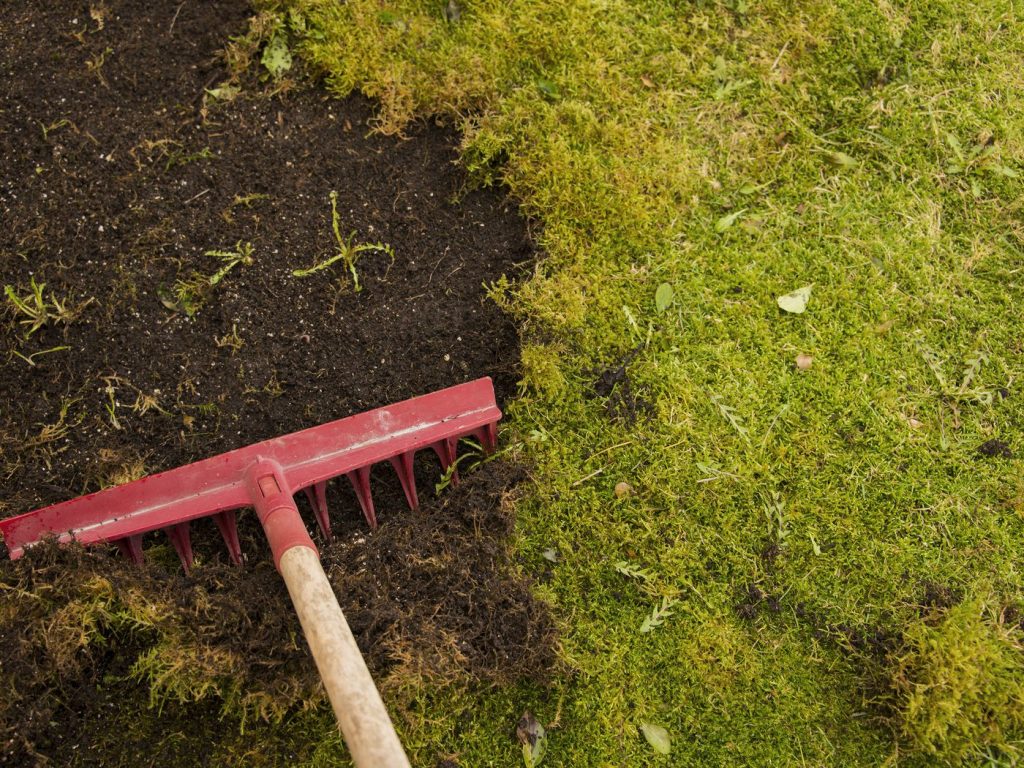 Moss can spread fast in lawns that are already struggling with patchy blade growth. It also tends to be a sure sign that your soil and turfgrass are dealing with an underlying problem, including poor drainage, heavy foot traffic damage, or a lack of proper fertilizer.

But not to worry—any gardeners presented with this mossy problem can still turn their lawn’s health around!

You can prevent your yard from being taken over by uneven patches of spongy, pushy moss by addressing the invader at the root of the problem. Read on for tips on how to kill moss in lawns.

Defeating moss in your yard can be a repetitive task, simply because moss itself can be difficult to fully eliminate. For such a soft, plushy substance, it is deceptively hardy. But there are certain steps to take to eradicate moss from your yard fully.

First, it’s important to ascertain what kind of moss problem you are dealing with—this includes moss characteristics and how extensive the invasion is.

Fine, feathery mosses with fern-like tendrils tend to grow in areas with poor drainage. They thrive on the pooling water and absorb all the extra hydration and nutrients that form there. Alternatively, if your soil is more acidic and dry, the moss tends to grow more like a low, lush carpet.

Next, it’s time to inspect the damage. Depending on how ingrained the moss incursion is with the rest of your turfgrass, you will need more intense or less stringent removal methods.

If the moss issue is small, you might be able to scarify the lawn with a tine rake to remove it, and then address the underlying issue of drainage or fertilizer to prevent a reappearance.

But if the problem is deeper and spread out over the majority of your yard, you will need to bring in the big guns to eliminate it completely, including the following methods.

How To Kill Moss With A Chemical Moss Killer

One of the easiest ways to kill moss in the yard, particularly if it has spread through the majority of your lawn, is by applying a commercial chemical killer. Most moss-killing products are specially formulated with ferrous sulfate to attack the moss directly and effectively.

Additionally, if you are worried about the health of your lawn around the problem area, you can find moss killers with a fertilizer component that will nourish turf while eliminating moss.

How To Kill Moss With Baking Soda 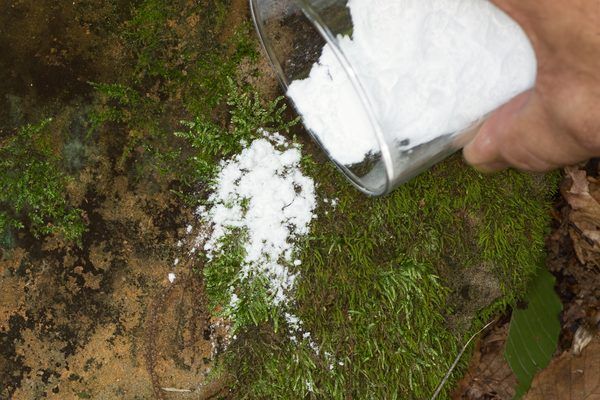 There are two methods for using baking soda against moss.

To create a targeted spray solution, combine 3 tablespoons of baking soda with 1 quart of water and stir well. Pour into a spray bottle and apply to the mossy areas, repeating until the moss has withered and died.

Or, for larger areas, you can use baking soda on moss in dry form. Spread it directly over the moss and distribute it evenly with a broom. After about 2 or 3 days, the dead moss can be removed.

How To Kill Moss With Bleach

Bleach can be riskier to use on your lawn, as it can kill the plants that you want to propagate as well as the invaders. But by diluting it, you can make bleach safe to use on your grass while still being deadly to moss.

To mix your bleach solution, combine 5 gallons of water with 20 ounces of liquid bleach and mix well. This can be used in a garden sprayer to get full moss coverage—spray over the problem areas until the moss is completely saturated. After about an hour, hose off the bleach solution and remove the discolored moss.

How To Kill Moss With Dish Soap

Dishwashing liquid is not only great for indoor cleanup, but also for tackling a moss invasion without the use of harsh chemicals.

To create a dish soap solution that will choke out the moss in your yard, mix 20 ounces of dish soap into 5 gallons of water in a bucket. Combine well and pour out over the mossy areas, saturating them completely. Or, add to a garden sprayer and spread it that way.

Most mosses will die and begin to wither within a day and a half after applying this solution, so keep an eye on your yard and rake up the moss when it’s dead. 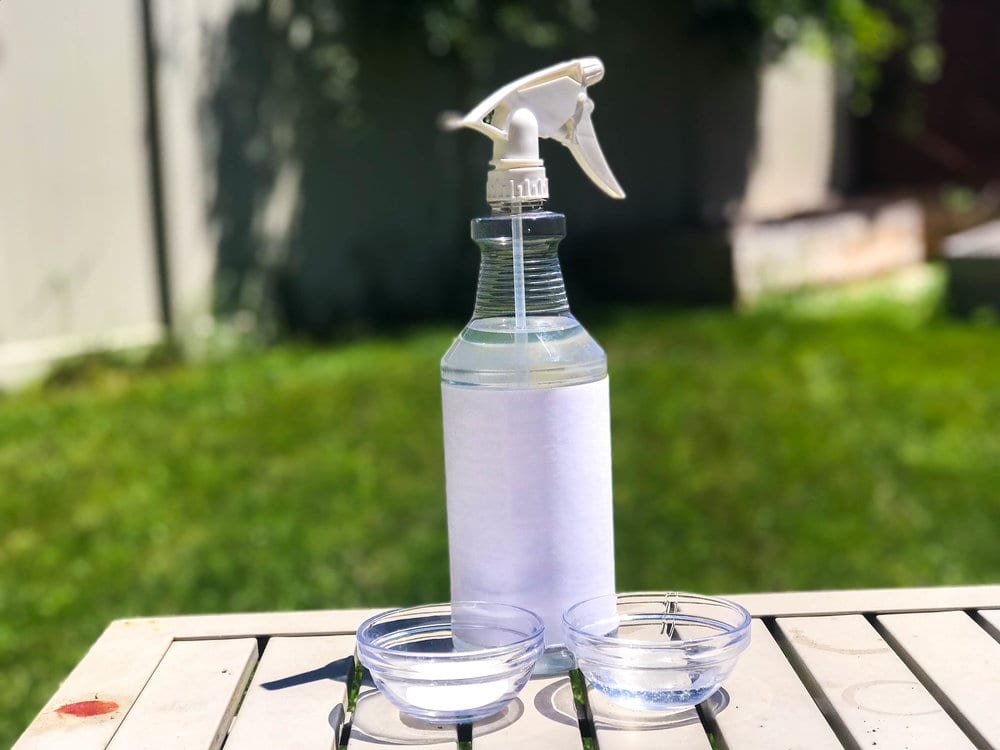 How To Kill Moss With Vinegar

Vinegar is an acetate liquid, so it will work effectively against moss in your yard. However, vinegar can also attack the surrounding turf or other plants, so be cautious in your application.

For a moss-killing solution, mix two parts of white or apple cider vinegar with one part of warm water, depending on the size of your problem area. Pour into a manual spray bottle or garden sprayer, then use it to saturate the moss well.

This should work to discolor and wither the moss within a few days, possibly with the help of repeated applications.

When To Kill Moss In Your Yard

It’s important not only to choose the best solution to killing the moss that has taken root in your garden, but also to understand what times of the day and year are best to apply the moss killer.

Moss is best dealt with during the early morning hours when the lawn is still damp from overnight dew. This allows the product to seep into the root systems, as well as covering the surface of the moss.

You should also check and make sure that no storms are forecasted for about a day after you plan to apply moss killer. Any heavy rainfall will simply wash away the product and you’ll have to start all over again.

In general, gardeners should aim to kill moss in their lawns during the late spring or early fall, when new growth has begun and before cool weather sets in.

Additionally, you should not seed the lawn before you set out to kill moss, as most moss remedies will harm newly germinated turfgrass as well.

The methods for killing moss are fairly straightforward, but it’s also important to address any further questions you might have about the nitty-gritty of the process.

How Do You Kill Moss Quickly?

Luckily, most remedies will work swiftly to take care of your moss invasion.

Because the methods described previously attack the moss at the source, removing its ability to absorb adequate water and continue to propagate, successful product applications will kill moss quickly and you can see the visible results very soon.

Most moss-killing solutions will begin to work almost immediately, and you should see results within 2 to 4 days, depending on the method you choose. With repeated applications you can quickly eliminate the threat of moss from your yard.

Is Bleach Or Vinegar Better To Kill Moss?

Both methods are effective in killing moss. But because bleach is such a highly caustic chemical, it can cause damage to the plants around the moss. Vinegar can be a better choice if you want to preserve the green growth of the turf surrounding the invader.

If you don’t want to apply any type of chemical product, it’s time to dig into your cupboards for some household remedies. Vinegar, baking soda, and salt are all great compounds to apply to the moss for a natural herbicide remedy.

Salt alone generally won’t kill moss, especially if you’re just sprinkling table salt onto the problem area. However, large amounts of salt combined with other household goods can form a powerful compound that works to kill moss in your yard.

For instance, a mixture of 1 pound of salt, 1 tablespoon of vinegar, and 1 gallon of water creates a naturally caustic solution that’s ideal for an at-home moss killer.

Dish soap is one of the more easy and effective ways to kill moss. Because the soap’s chemical formula and degreasing agents work to prevent the moss from absorbing water, it effectively dries it out and makes it easy to remove.

Virtually any dish soap will work when killing moss as well. Whether you have an expensive, name-brand soap in the kitchen, or just an off-brand one, you can successfully apply it to the problem area.

Among the plants that gardeners do not want to appear in their yards, moss is a hardy substance that works to choke out the surrounding turfgrass. It absorbs water nutrients faster than grass does, slowly pushing its way through the lawn.

And while moss is a very adaptable, highly tolerant plant, if you apply the right techniques and products, you can eliminate the threat of mossy malevolence to your yard and hopefully, prevent it from returning.