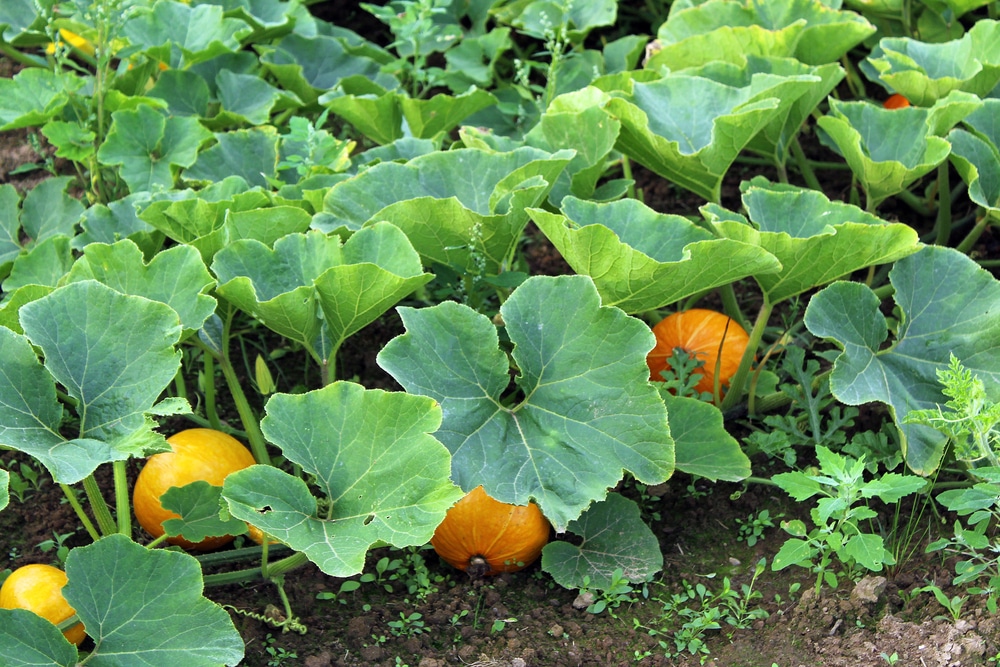 There are few plants that create as much fall nostalgia as the pumpkin. But that nostalgia can quickly turn to frustration if you’re dealing with a bird’s nest of thick vines.

But the last thing you want to do when you’re trying to reign everything in is damage your plants. That’s why we came up with this guide to walk you through everything you need to know about trimming pumpkin vines.

Why Should You Trim Pumpkin Vines? 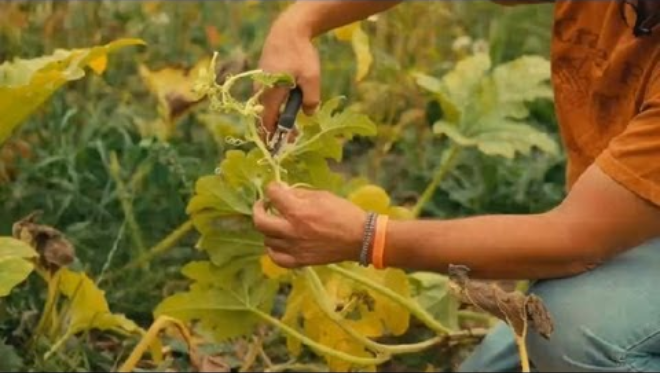 When you’re new to vegetable gardening, it can be a little daunting to start trimming. You want the best possible harvest, and when you begin to trim it can seem like you’re slowing things down.

But the truth is that when you do it right, you’ll actually get a more bountiful harvest when you trim the right vines. That’s because all the vines pull nutrients, but if you know what you’re looking for, you can identify which vines will give you the most pumpkins!

So by trimming the unproductive vines, you can give yourself a more bountiful harvest while keeping everything a bit neater and tidier! But to get those results you can’t just start trimming any vines you want, and if you trim the wrong ones you can accidentally take out the entire plant.

Identifying Which Vines to Trim

While hearing about main, secondary, and tertiary vines is great, if you don’t know what we’re talking about, you won’t be able to use this guide effectively. That’s why we decided to break down each of the most notable terms for you here.

The main vine is attached to all the roots in the ground, and it’s the primary source of nutrients for your plant. It’s because of this that you’ll want to keep it as the longest root on your plant.

Secondary vines are the vines that grow off of the main vine. They’re not as thick, and you shouldn’t let them get as long, but they’re generally great fruit growers. Secondary vines can grow their own root system if you leave them be, but you generally want to keep them above ground to develop fruit.

Once you trim the secondary vine, you can then put the end in the ground to develop their own root system to help the fruits grow.

Because of this, you should usually trim tertiary vines as soon as they appear. This allows the plant to stop diverting energy to vine growth, and to instead focus on gourd growth on the main and secondary vines.

When Should You Trim Pumpkin Vines? 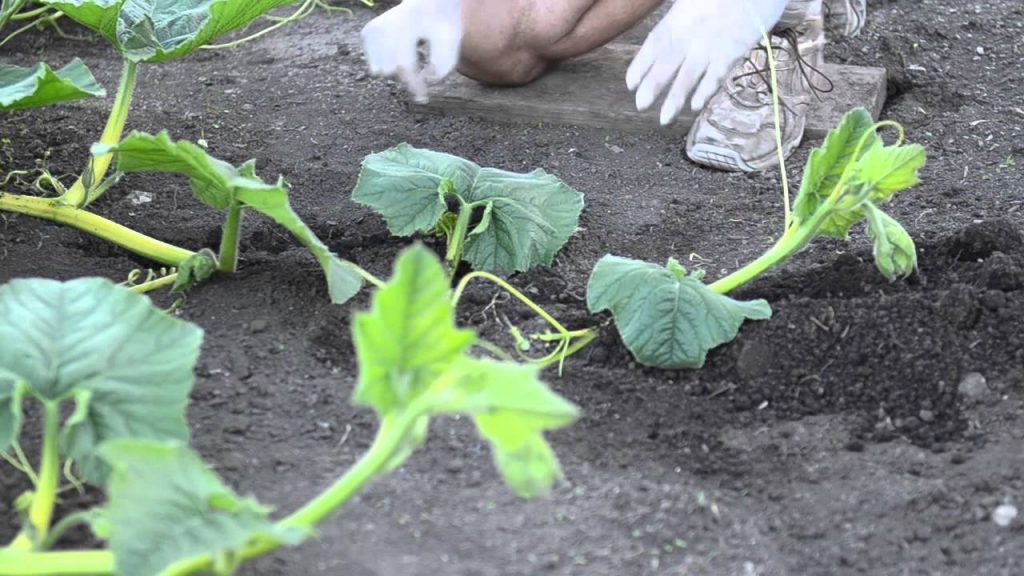 The truth is that figuring out when to trim a pumpkin vine is a pretty straightforward process. You want to keep the main vine right about 15-feet, but don’t cut it off from there if there’s already a fruit growing on the other end or right at the end.

If that’s the case, leave about five feet from the last fruit and shear from there. But that’s for the main vine. For secondary vines, you only want to give them about ten feet before pruning. And for tertiary vines you want to remove them as soon as possible.

While they can grow fruit, they will divert nutrients away from the main and secondary vines, and they don’t produce as healthy of fruit.

You also don’t want to allow a larger pumpkin variety to grow more than five or six gourds. While it might seem like a good idea to get as many pumpkins as you can out of a single plant, the truth is that the plant won’t be able to get enough nutrients for all the gourds to thrive.

By trimming down the extra gourds, you’re ensuring that the plants you do have growing will thrive into big, beautiful pumpkins.

How To Trim Pumpkin Vines

When it comes to trimming pumpkin vines, identifying the right vines and the right location to trim is the hard part. Once you identify where you’re going to prune, all you need to do is get a set of shears and cut it at the right location.

From there, dig about one to two inches down and bury the vine. Cover the vine with mulch and you’re good to go! While burying the vine isn’t 100% necessary, it has multiple benefits.

First, it gives the vine the chance to set up another root system. This means more nutrients for the plant and a better harvest! Second, it shields the open end from pests. These pests can damage the rest of the vine, and that can damage the entire plant!

Finally, it helps protect the exposed vine from the elements. While the chances that it starts to rot are slim, it’s not zero. And a rotted vine is far worse than one you wouldn’t have trimmed in the first place!

Because of this, we recommend not trimming the vine at all if you’re not willing/able to bury it. While the chances of something bad happening are usually slim, if you don’t care for it properly after the fact it can damage the entire plant and lead to less than ideal results. 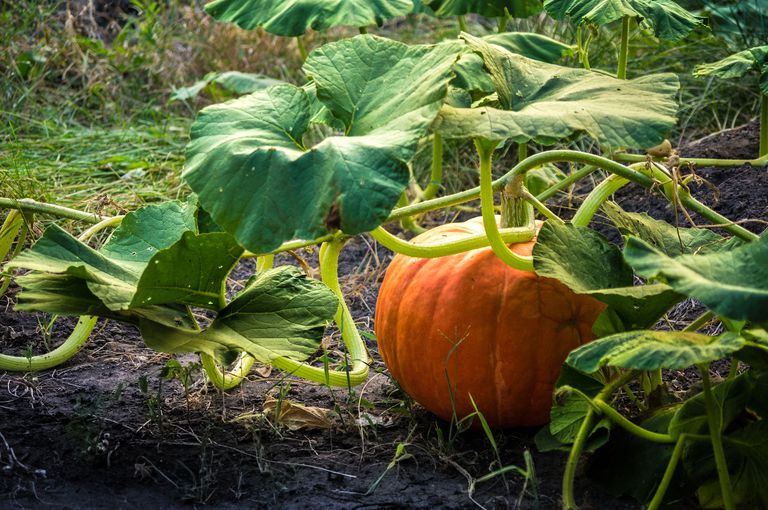 While you certainly don’t have to trim or work to control your pumpkin vines, if you’re looking for the best possible results, we highly recommend it. Not only does this give your plant more room to grow, but it diverts nutrients to the gourds for maximum growth.

Novices often plant seeds, water, and hope for the best. Experts know it takes a little more work though. Getting a healthy crop isn’t about luck, it’s about hard work and persistence!

If you still have a few questions after reading through the guide, then you’re not alone. That’s why we came up with this frequently asked question section to answer any lingering questions you might have.

Should You Cut Pumpkin Vines?

If you cut the right vines and treat them correctly you should absolutely cut pumpkin vines! Cutting pumpkin vines allows you to divert nutrients and energy from unproductive vines and vine growth to fruit growth.

This means you get more and larger pumpkins, which is exactly what you want! Not only that, but it also allows you to keep your pumpkin plants manageable, which is a pretty big deal all on its own!

When Should You Cut Pumpkins off the Vine?

You put in all that work to grow the pumpkins, so you need to ensure that you harvest them the right way. You know a pumpkin is ready to harvest when the entire pumpkin is the correct color and the rind is hard. If you can indent the pumpkin with a fingernail, then it’s too early to pick!

If you pick a pumpkin too early, they will start to shrivel up in just a few days, and won’t taste right. That’s not what you’re looking for whether you’re looking to harvest them for a pie or as a fall decoration!

Can You Leave Pumpkins on the Vine Too Long?

No! As long as you pull the pumpkin before the first frost, there’s no reason you can’t leave it on the vine a bit longer. Pumpkins will only continue to ripen and grow while they’re on the vine, and there is no benefit to picking them earlier.

That means that while you can pick a pumpkin too early, you can’t really pick it too late. So, when in doubt, leave it on the vine a little longer!

How Many Pumpkins Do You Get per Plant?

When you’re getting ready to grow pumpkins, one of the most important questions you need to ask yourself is how many pumpkins you get per plant. Typically, you’ll get two to five pumpkins per plant.

Of course, this depends on the variety. Small miniature pumpkin plants can give you closer to a dozen, while some giant pumpkin varieties will likely only give you one or two.

How Do You Pinch off Pumpkin Vines?

While there are no real special requirements for how you pinch the pumpkin vine, it does matter what you do with them after you pinch them off. Anytime you pinch off a pumpkin vine you should completely submerge it in the soil to keep it from rotting.

You want to put the vine about one to two inches under the soil, and then cover it with mulch. Not only does this help keep it from the elements to prevent rot, but it also helps set up a secondary root system and it keeps pests out. It’s a win-win-win!

When you’re pinching off the pumpkin vines, use a set of shears, otherwise you risk not getting a clean cut, and this increases the chances of rot.