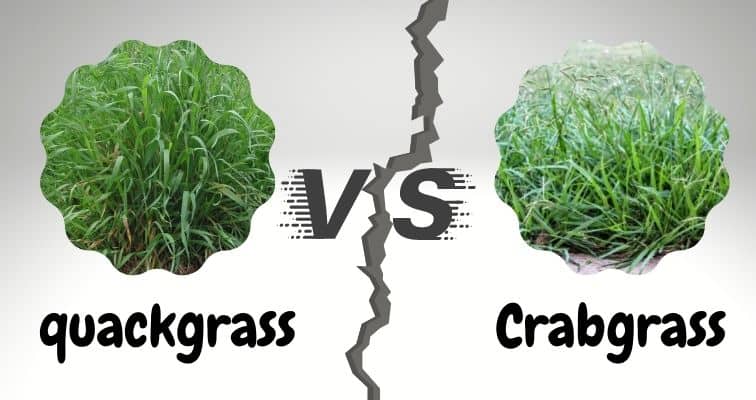 When it comes to the grasses in your lawn, some can be great assets and some can be a real pain. Not to mention, telling the difference between grassy weeds like quackgrass and crabgrass can puzzle gardeners to no end.

But there are a few ways to determine what grass you are dealing with, and some great methods for removing it from your yard. Read on for a discussion of quackgrass vs crabgrass, the key aspects of identifying each, and several elimination treatments.

Quackgrass Vs Crabgrass: Overview And Identification

The first step is knowing which grass you are dealing with: is it quackgrass or crabgrass? Let’s go through some brief identification tips that can help you determine the type of grassy weed and its key characteristics.

Quackgrass is a type of perennial weed that is also cold-hardy. This allows it to regrow year after year unless eliminated properly. In some climates, it even stays green all year long, thanks to its tolerance to weather. 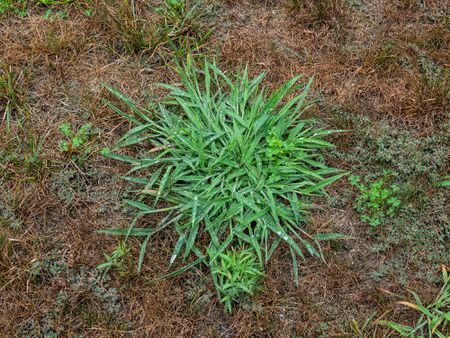 How To Identify Quackgrass

This sneaky and invasive weed can resemble fescue grasses, annual ryegrass, or even crabgrass, making it difficult to pinpoint. But once you know what you’re looking for, quackgrass becomes easy to identify.

Look for long, tapering leaf blades that appear broader and thicker than most normal blades of grass. These quackgrass blades are generally about ⅓ inch thick, and will be attached to a stiff, hollow stalk.

Blades will also appear to be a greyish, blue-green hue with long points that curl in on themselves. Additionally, quackgrass tends to have sheaths around the base of the stalk that can be textured with a scattering of fine hairs.

Next, look for projections that come from the base of the plant, called clasping auricles, which assist the grass’s rhizomes in spreading. If you spot these signs, then chances are that you have quackgrass on your lawn.

One of the most common annual grassy weeds that grow from seeds during spring, crabgrass is a hardy and stubborn substance. Because crabgrass is one of the most tolerant and adaptable grasses, it will thrive even in conditions that other grasses eschew, making it difficult to eliminate.

This includes dry and arid conditions, areas with frequent droughts, lack of nutrients, imbalance pH levels, excessive moisture, and more—crabgrass grows in it all! Though it does die off over the winter, leaving behind patches of brown, dry material, it regrows from seed as soon as spring arrives. 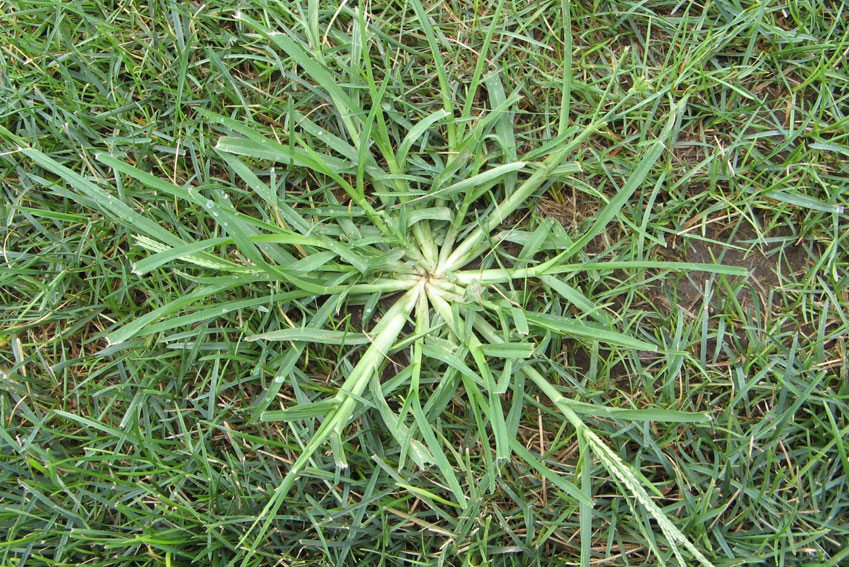 How To Identify Crabgrass

As a highly adaptable grass, able to tolerate a variety of climates and conditions, crabgrass can sometimes have differing appearances. However, if you learn to look for a few common and telling signs, you can identify crabgrass even when it’s masquerading as a different plant.

When crabgrass first sprouts, it resembles a corn plant with thin leaf blades and wide-reaching side shoots that will help it eventually spread across your yard with ease. From there, a mature crabgrass plant will have a star-shaped growth pattern, as the pencil-width leaves and stalks radiate out from the center.

With a bright green leaf color that can turn to a bruised, purple hue at the stalks, as summer progresses, the stems will be much heavier than normal grass and tend to bow back to ground level. If you start noticing these characteristics, it’s likely that crabgrass has come to stay in your yard.

Once the type of grassy weed has been identified, the next step is removing it from your yard. But since both weeds are so hardy and tolerant to a variety of unsatisfactory conditions, this process can be a true challenge for even the most experienced gardener.

Read on for some of the best tips on how to get rid of both quackgrass and crabgrass in your lawn.

How To Get Rid Of Quackgrass And Crabgrass

Luckily, because quackgrass and crabgrass are similar in terms of root systems, growth structures, and tolerance levels, you can generally utilize the same methods of elimination for both plants. 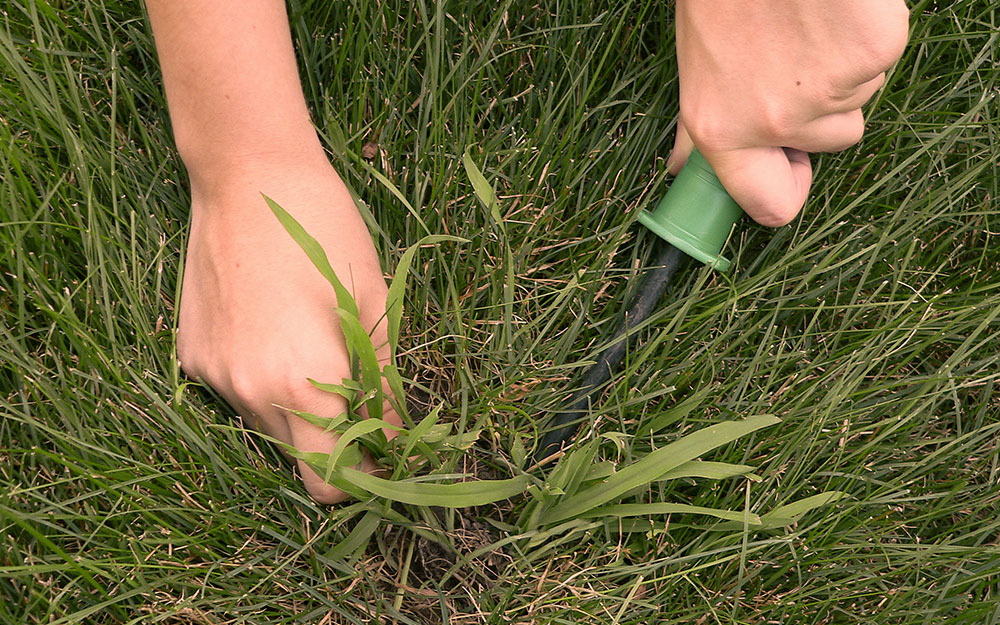 This might be one of the more labor-intensive methods of getting rid of your grassy weeds, but it has also proven effective for smaller patches of weed incursions.

Gather a garden shovel or spade, a garbage bag, and gardening gloves. Then, dig one foot around the grassy weed patch, as well as one foot deep. Make sure you don’t damage its root system though, as it can regrow from a severed root or rhizome.

Once you have gathered the entire plant, including its roots, place it into the bag and dispose of it. Refill the hole with mulch and grass seed.

For deeply rooted quackgrass or crabgrass, a herbicide might be your best option. Gardeners can generally choose between a selective or non-selective herbicide product, depending on the concentration needed and the damage you are willing to risk to the surrounding turf.

If you’re nervous about applying the chemicals yourself in the proper doses and ensuring the product doesn’t make its way into the storm sewer systems, you can call a professional weed elimination company to come in and help.

Using the sun’s rays to bake the weeds and kill them is best done during the heat of spring or summer. Take some clear plastic tarps or heavy-duty plastic sheeting and lay it over the problem areas of quackgrass or crabgrass, with the coverage extending at least three inches beyond the weeds’ perimeter.

Then, anchor them down with rocks or metal rods so that the plastic cannot move, and leave it to bake in the sun for about six weeks, or until you see that the weeds beneath the plastic have turned brown and are dead.

While it might not work for long-term elimination, pouring repeated doses of boiling water over the top of smaller patches of grassy weeds can be useful in keeping their growth stunted and damaging the plant itself.

However, because the root system is unlikely to be affected, this doesn’t typically kill the entire plant unless combined with other methods.

Making a solution of vinegar, Epsom salts, and dish soap is one of the best at-home remedies for grassy weeds, including quackgrass and crabgrass. This natural herbicide has been successful for many gardeners.

To create your spray, combine one gallon of white vinegar, one cup of Epsom salts, and one tablespoon of liquid dish soap in a spray bottle. Apply this over on top of the quackgrass or crabgrass on a day with no breeze to blow it away, and when the sun is out. This will dehydrate and kill off the weeds over the course of several applications.

Quackgrass vs crabgrass—two of the most common and stubborn grassy weeds, and the bane of some gardener’s yards. They are hardy and recurring, so removing them can be daunting.

However, by learning to identify each type of grass and how to safely eliminate it from your yard, both quackgrass and crabgrass can be a woe of the past as you move onto greener pastures—or at least, a greener and weed-free lawn!

How Do You Kill Quackgrass?

You can try many at-home remedies for removing quackgrass from your lawn, including natural solutions or a light herbicide. But because this grass is so hardy and eager to regrow in many conditions, eliminating quackgrass once and for all can be very difficult.
If you choose to try the chemical route, a non-selective herbicide might be the best option, as products such as Roundup have been successful in eliminating both the plant and the extensive root system of quackgrass. However, keep in mind that such herbicides can also harm the rest of the turf around the invading grass weed.

Should I Dig Out Crabgrass?

Because crabgrass is an annual weed, once it dies for the winter months it leaves behind seeds for resprouting in the spring. Thus, it’s paramount to remove the dead crabgrass and its seeds before they can release them into the soil and prepare for germination and regrowth as soon as the snow melts.
You should absolutely dig out crabgrass every fall as soon as the clumps die off after the first frost. This will help lessen the amount of crabgrass seed growth you need to deal with in the spring!

Thankfully, an at-home solution with vinegar can be very effective in combating quackgrass. Using white vinegar on grassy weeds is one of the best natural ways to eliminate them from your yard. Plus, this type of solution is even more effective when combined with a heavy-duty dishwashing liquid, like Dawn dish soap.

Recently, a mixture of vinegar, Epsom salts, and dish soap has become all the rage in fighting weeds found in the garden and yard. It’s partially attractive as a remedy as it avoids the use of harsher chemicals on your property, and because it actually does work.
Using a treatment made of vinegar, Epsom salts, and a liquid dish soap such as Dawn will kill weeds in your lawn, but it also depends on the concentration of your solution and when you apply it.
By creating a strong concentration and using it only on the problem areas when the sun is out, you can dry out the weed leaves and kill the plant over several applications, particularly if it’s a hardy one like quackgrass or crabgrass.

How Do You Kill Quackgrass Without Chemicals?

If you don’t want to use chemicals to remove quackgrass from your lawn, there are a few natural methods that you can try, including the solution mentioned of vinegar, Epsom salts, and dish soap.
Alternatively, gardeners can also use solarization practices or applications of boiling water to eliminate pesky quackgrass. Digging it up by hand is a laborious process, given the size of quackgrass’s root systems, but it can also be an effective way to kill quackgrass without using chemicals.