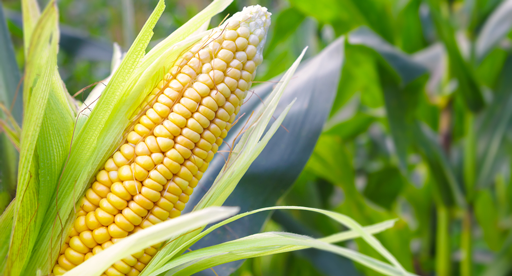 Growing sweet, luscious cobs of corn is possible in a large suburban garden, and what is more delicious than picking cobs straight off the plant and dashing home to cook them?

Corn isn’t difficult to grow either. Stick to a few basic rules and your corn will thrive.

We chose 9 of the best-tasting sweetcorn available, the fastest maturing, the late maturing, the most disease-resistant, the corn that makes Polenta, the Heirloom seed, the sweetcorn of the desert, and the organic choice.

Points to consider before choosing seeds

Is your garden big enough to grow a large patch? You will need a sunny square; 3 x 3 meters (10 x 10 ft square) is a good size starter patch. There’s no point growing sweetcorn in straight lines, because these plants are wind-pollinated and need to be close together for this to happen.

Many varieties can grow even taller than 2.13 m (7 feet) so make sure you plant in an area where direct sunlight will still reach your corn. Tall trees cast shade, as do walls. Choose a space carefully!

Sweetcorn is quite a thirsty plant, so be sure you have a water butt, tap, or a long hose that is able to reach them, particularly on hot summer days when the corn is swelling. Some seeds cope better with less water, but as a general rule the more generous you are with the water, the better your cobs will be.

Sweetcorn needs rich, humus-filled earth, so apply a generous amount of well-rotted manure (or homemade compost) in the fall, and dig it in well. Excellent drainage is required too, so if you have clay soil add some sand and try to loosen up the particles. Allow the soil to settle during the winter, and rake it in spring just before you plant your seeds.

We have recommended some of our favorites below, so think about whether you want enhanced Heirloom organic varieties, or enhanced super sweet corn. If you want to learn more then keep reading! 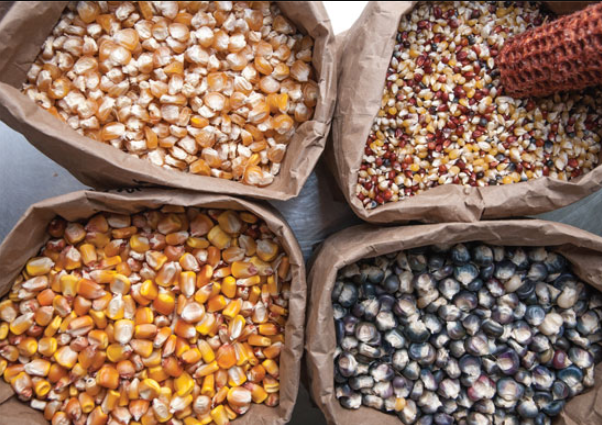 9 Varieties of sweetcorn: from Heirloom to gifts from the gods!

is one of the oldest sweetcorn seeds still being grown. It’s heirloom corn, dating back to about the middle of the 1800s. (I must add here that the next corn on my list has probably been growing a lot longer than this, but is not sold by a commercial company).

Evergreen is a real growers’ favorite because as its name suggests, you can leave the corn on the stalks and pick them as required, over a much longer period than some other sweetcorn varieties. It is a standard (SU) variety – see more about the different types of corn in FAQs.

Evergreen matures late and keeps well, but it’s so delicious it rarely makes it to the freezer, although the seed suppliers claim it’s excellent for canning. The ears grow to over 20 cm long (8 in). Make sure you eat it or freeze it very soon after picking, because otherwise, all that sugar turns to starch super quickly. 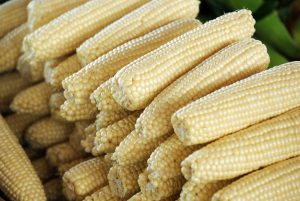 The shade of blue you see when you grow this sweetcorn is such a surprise to the eye! It is said to be a gift from the Creator of the Hopi Indian tribe, who grew it in arid, almost desert conditions in Arizona in the US.

The story tells of other tribes jumping in to claim the bigger ears of corn, while the Hopi waited patiently for their turn, and this corn is said to represent stewardship of the Earth, respect, and cooperation.

By growing it, you will join many other stewards patiently cultivating their crop, and will eventually enjoy some tasty blue corn. The stems grow to at least 5 feet tall, and the ears are anything from 20-25 cm (8-10 in) long.

Because it’s used to the desert conditions, huge amounts of water are not necessary, which will also help to ease your environmental conscience even further. Traditionally, this was ground into corn flour, but to us they are best eaten soon after you pick them, with a dollop of melted butter. 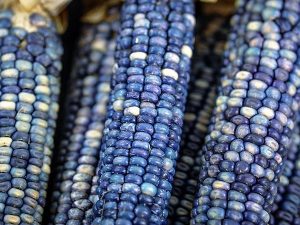 is an example ofa hybrid; this is a seed that has been crossbred with other productive grains to improve its chances of maturing to a better size, often a cross between sugar corn and pole corn.

Conqueror produces sweetcorn in late September or October, so if you want later corn, this is a good one to try. These stalks climb tall – as high as 2.13 meters (7 ft) tall. You can expect to pick 3 ears from each stalk, due to that F1 engineering, and normally they reach about 20 cm (8 in) long. 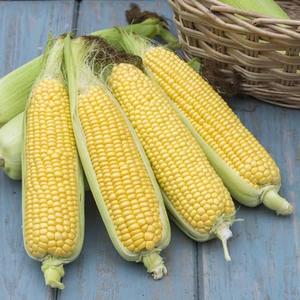 Ambrosia was said to be the food of the gods, and this sweetcorn promises you the same! These cobs are an extraordinary mix of white and golden, and they swell very plump when they’re ripe, which is enough to make your mouth water.

You can eat these ears fresh off the stem, and each one is normally about 20 cm (8 in) long. This is an SE corn, sugar extended – see FAQs below.

is ideal if your space is tight. Regular seeds will generally need more space, but don’t despair! You can grow these plants closer together and in the same square shape, just on a mini scale.

However, these seeds do produce much smaller ears of corn, which you often see bottled in vinegar as delicatessens, or rare or unusual prepared foods. They taste amazing, so for those with a smaller garden you can still grow great sweetcorn. 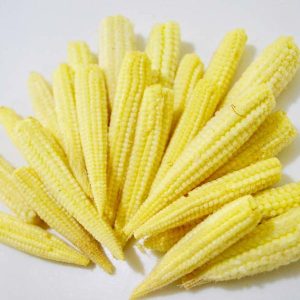 is the sweetcorn to fit this bill. They consistently produce sweetcorn early, and have shown some resistance to common diseases. These have a wonderfully sweet taste too, with a good-sized ear.

All the way from Mexico, the country that deified their staple crop.

Black Aztec sweetcorn is even darker than the Hopi Blue sweetcorn we have as number 2. This corn will only germinate in warm temperatures, and needs a good layer of compost top dressing to produce these dark-colored ears.

Corn was a god for both the Aztec and the Maya people, and is reflected in their sculptures, manuscripts, and art as well as their farmlands. This corn brings a taste of the exotic to your backyard. It can survive in arid conditions, but if you water it well the Black Aztec sweetcorn will reward you with plumper and more delicious ears of corn.

Traditionally this corn was ground into cornmeal and used in cooking, so if you’re feeling adventurous, this can be a culinary talking piece at your next dinner party.

Floriani Red Flint offers sweetcorn lovers an Italian variety with dark red kernels, which are often used to make polenta and grits. The sweetcorn takes 100 days to mature, and it really benefits from rich soil, giving you an unusual sweetcorn to add to your growing experience. 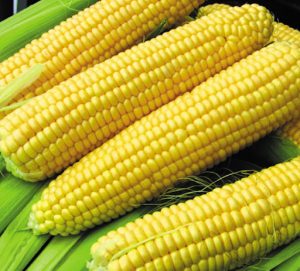 This is the Queen of the cobs, as far as we are concerned. In 1902 this sweetcorn was delivered to the US market at a time when all sweetcorn currently grown was only used to feed animals.

Suddenly this crop became a hit for human consumption, and now it’s an Heirloom seed variety. The sweet golden yellow ears of Golden Bantam have never looked back! The stalks are shorter than some others, at about 1.5m (5 ft) tall, and with 2 juicy ears per stalk measuring 14-17 cm (5½ -6 ½ in) long.

These wowed the world with their flavor back in 1902 and are best eaten fresh, or can be stored in the freezer for later. You can even save the seeds to grow them again next year! We save these seeds year after year, and they adapt to our soil and conditions easily. In our opinion, this is the most reliable and tasty sweetcorn available! 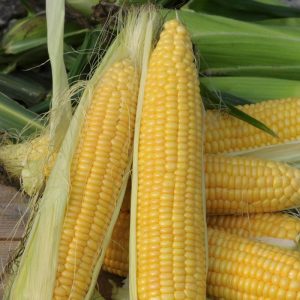 How to grow your corn

When your seeds are chosen then it’s time to get planting!

How do you know when your corn is ripe?

Corn has a stem, which holds the ears of corn you will pick. At the top, you will see that it produces silks, (long thin shiny strings) that grow green at first, before turning a darker color as the ear ripens.

The easiest way to pick a cop is to bend it away from the stem, and it usually cracks. Or just cut it off with pruning shears.

How many types of sweetcorn are there?

Organic sweetcorn has nothing except the seed, no genetic modification, no improvement techniques, just Mother Nature at her best. Other types are:

Why do you need to eat corn quickly?

The sugar begins to turn to starch as soon as you pick them! You can freeze some cobs as well, which stops the starch problem, and then eat them quickly once defrosted.