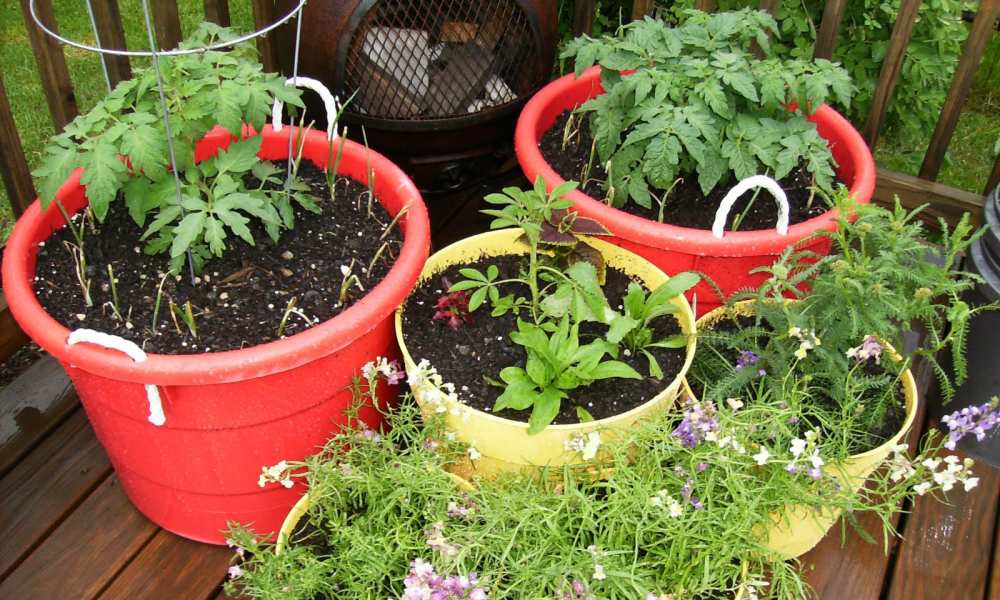 After almost 140 years since then, we’re still in the dark about how many types of worms are there on mother earth.

But if you narrow down our search into the types of worms in potted plants, we might put some daylight into it. We’ve gone through tons of forum postings by gardeners and figured out the answer anyway.

Got a potted plant garden? If positive, we think you should stick to the rest of this post.

Types of Worms in Potted Plants

If you’ve noticed some small white worms in potted plants, there’s a big chance that it’s a potworm invasion.

The name ‘Potworms’ resembles that this kind of worms is found in containers or pots only. They are quite segmented siblings of typical ‘earthworms’ and features a small, creepy and white outlook. Sometimes, you might confuse them with baby ‘red wigglers’, but they are completely different. 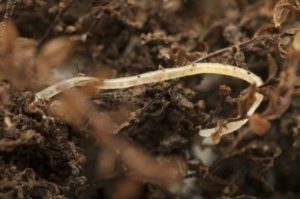 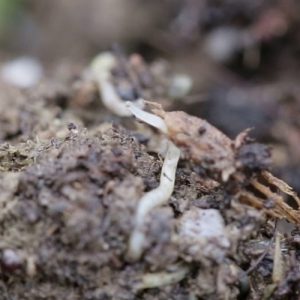 If you notice some tiny worms in potted plants, there is a good chance that it’s a potworm.

Potworms feature a tiny, whitish body and they invade in massive numbers. In about 1 square foot of container ground, you might find more than 2500 potworms. But this sort of population doesn’t choke the overall ecosystem of the pot soil.

Potworms or Enchytraeids love to live in highly organic environments such as containers or pots. By nature, they love to enjoy a slightly acidic environment. Therefore, they will spring up right after you’ve added something acidic is put in the container soil.

Potworms are quite similar to earthworms in potted plants in terms effects on the plant and soil. They usually don’t affect the living plants.

As we said before, potworms don’t have any direct impact on plants that’s bad for plant health. But their likeliness to grow massive in number might be a problem at some point.

If the population grows beyond control, they will have an obvious competition with other worms like red wigglers for food and nutrition. So, other useful worms might not get to do their job properly. Getting rid of worms in potted plants happens to be a must in such scenarios.

You might have heard a lot that, red worms are the gateway to turn your kitchen and garden waste into organic fertilizer for your garden plants.

Well, that equally works for plants in a pot or container as well.

Basically, Red wigglers are scientifically known as “Eisenia foetida”. They are a significant variety of earthworms that function as small composting units in any worm bin.

As a common earthworm nature, they like to dig through the soil in search of wet and warm environment. This nature of red worms also explains where they love to thrive in warm environments like compost bins or potted plants etc. 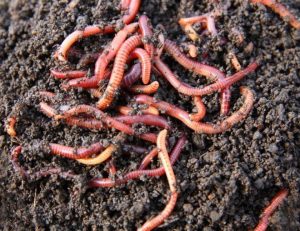 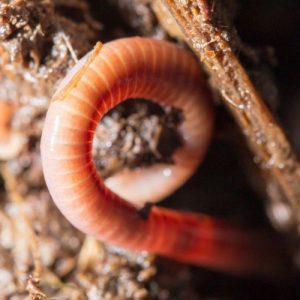 Red wiggler worms usually come in a body length of 2-3 inches. As the name suggests, they sport a physical appearance in a reddish-purpose color. To be more specific, you would find blemishes of yellowish color at the end of their body(tail).

Like all other earthworms in outdoor potted plants and bed, red wigglers also have a segmented body structure.

An important part of their nature is, they are vegetarian. Which means, they are only able to eat organic materials like leaves, kitchen scraps, garden waste, etc. Eating them up, they convert the organic items into humus, which is of immense help for the plants in the pot.

Unlike other similar worms like Nightcrawlers, red wigglers have shorter lifespan. Also, their ability to reproduce is massive.

In most of the cases, red wiggler worms in potted plants happens to be quite a friend for you. Here is how-

As per our concern, red worms bring no harm at all when it comes to plant health. But just like any other worm, the overpopulation of red wigglers might make it a congested place to survive.

YES! That’s how bad and harmful they are.

This worm is the ‘Larvae’ stage of many beetles like Christmas Beetle, African Black Beetle, Pasture Cockchafer, Scarab Beetle etc. As the larvae of all of these beetles look alike, they’ve got the common name of ‘Grub Worm’. 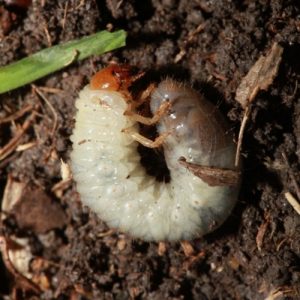 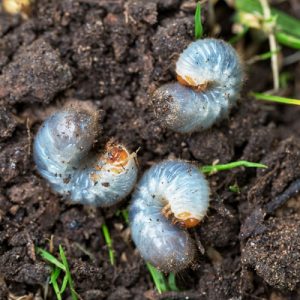 The mother worms lay eggs on 2-5 inches deep under the ground. After about 30 days, the grub worms emerge from there and start feeding themselves. At first phase of growth, they live on micro-organic materials. After a few more days, they start to eat the plant roots. Before this happens, you better learn how to get rid of grub worms in potted plants right away.

This ‘Larvae’ stage of this worm lasts for several months, mostly throughout the winter. In spring, they turn into adult beetles.

Being marked as one of the most harmful worms for potted plants, Grub worms hardly bring on any perks for them.

However, if you’re growing legumes like beans or peas, they might not be affected by an infestation of grub worms.

This nasty looking pets are equally bad looking and bad for potted plants. Here are the most crucial harms that they convey to the plants-

If any of these symptops take place, we’re afraid that you’ve to learn how to get rid of worms in potted plants.

Another ‘vegetarian’ pests that we’ve got to talk about is the Millipedes. For those who don’t know them, might identify their memory of a long, black bug with hundreds of legs crawling under the container plants or leaves.

Because of their ‘Neutral’ kind of nature, most millipede kinds are known as harmless to plants. But their likeness of wet nature makes them more available under a container plant rather than dry and cool outdoors. 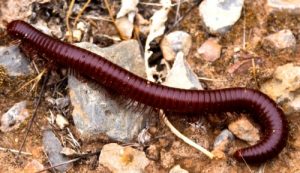 Millipedes in houseplants and containers feature a 1” long, hard body in a rounded and cylindrical body shape. Their body color is blackish brown.

The easiest way to identify them is through their segmented body with a couple of legs on the underside of each segment. Another interesting characteristic is that when they got hindered in their movement, they take the shape of a spiral coil.

By nature, Millipedes are fond of damp, wet and humid environments. That quite explains why they love to hide under leaves or in cracks at day and come out at night.

Potten plants are quite comfortable hosts of millipedes because of it’s ‘too moist’ environment. When the plants are kept out on the lawn during summer, that’s when these arthropods find their way to the container soil.

Among all of the worms that might invade in a container, millipedes are one of the most harmless ones.

Doing no direct harm to the plants, millipedes can, however, be annoying in some cases. Like-

These simple and small worms are quite different than others in this list, including earthworms. There are a handful of variations of this kind, and there are human, animal and plant pathogens.

In your potted garden, if you find plant-parasitic nematodes, that might be potentially harmful. These nematodes can attach several parts of the plant, including step, root, foliage, and flowers.

However, apart from the plant-parasitic nematodes, there are other diverse types of nematodes that are not as harmful as this. As an example, the ‘Bacterial feeding nematodes’, ‘Fungal Feeding nematodes’ etc. We’ll highlight on this point later. 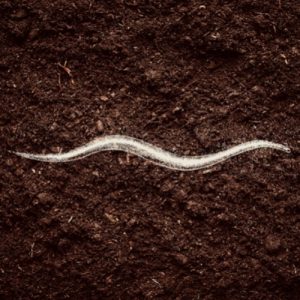 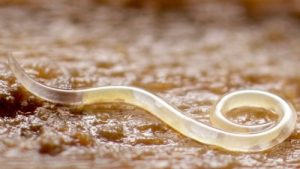 Unlike earthworms, these soft-bodied animals come in a non-segmented body structure. They have no legs and looks like a small, whitish tube.

Based on food preferences, there are five clear classifications of nematodes-

By nature, the harmful kind of nematode(plant parasitic) doesn’t stick to the potting soil that much. But it’s easy to carry them from your garden bed to your houseplants by mistake. In case you’re used to in using garden soil as potting soil, the change is even more.

Making sure that you’re only sticking to bacterial and fungal nematodes, there can be a number of benefits for your potted plants-

What to Know Before Putting Worms in Pots/Containers?

After learning all those worm types, the question of the moment is- can you put worms in potted plants?

No matter a worm is either good or even neutral for your plants, you need to be careful before putting a handful of them into the pot. Here are a few concerns that you should be aware of-

Make Sure They Find the Plant Roots ‘Organic’

Usually, most of the worms love to eat organic items in a potted soil. The list of such items might be the fallen leaves, plant waste, kitchen waste, composted wood, and moss, etc.

While using worms in potted plants, make sure that the root system of your plant doesn’t get on their dish. That will, for obvious reason, kill the plant right away.

All you need to do is study the worm in-depth and ensure that it’ll stick to dead organic substances only. Also, you need to ensure an abundance of organic materials for the worms, so that they don’t get too hungry to eat up the plant root.

Make Sure that They Aerate

Worms that don’t burrow the soil to a depth, don’t reach the plant roots enough air(oxygen), which is beneficial for the plant’s growth.

On the other hand, many worms(earthworms) can create a tunnel through the soils. And this eventually supplies the roots with necessary oxygen.

Another benefit of the aeration is, these worm casting created by the worms loosen up the soil. Thus, the soil doesn’t become hard and compact.

Worm Manure is a Must

For many of the growers, the only reason to put worms in a container plant is to get that lucrative ‘Worm manure’ for their plants. As a matter of fact, worm manures are one of the best organic food to feed your plants.

Unlike many other organic manures, they don’t need to be aged or composted before feeding them to the plants. Worm castings are ‘immediately’ consumable by the plants and provide instant growth boost to them.

Apart from eating up all the organic items in the soil, there are many demerits of worm overpopulation in a container plant.

More worms will create more worm casting through the soil. They will act as passive channels for the water to reach the dead bottom of the pot. So, when you water the plants, hardly it can get to the plant roots.